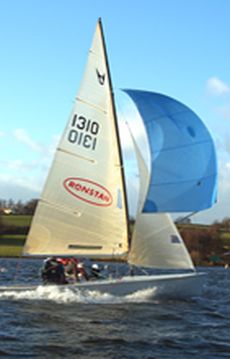 The Osprey is without doubt one of my fathers greatest boats. It was designed to be a contender for an Olympic Class in the early 1950s. At the trials it was pipped at the post by the Flying Dutchman. Ironically, I believe my father had previously been asked to ‘clean up’ the lines of the Dutchman! However, it was a close run thing. The Osprey was one of the very first trapeze boats, if not the first.

My father decided to enter this revolutionary design in the Round the Island Race that was open to all newcomers for the coronation year. Sailing three up with himself, Cliff Norbury (British Olympic Coach in the 70’s and 80’s) and John Oakley (Olympic Squad member in the 70’s), they won by a matter of seconds in a dramatic all day race (their closest rival was a Jack Holt design, I forget the name). It was made all the more memorable by the very fact that my father was disabled through polio during the war, which meant that he only had one good arm, his left, and couldn’t breathe if he fell in cold water!

We are now the proud possessors of the only Round the Island Race cup that has been able to be kept by the winner. It really put my father on the dinghy design map and established him as one of the UK’s three leading dinghy designers. We are therefore very proud of the Osprey.

No new Ospreys had been built for several years and Osprey sailors were anxious to see a future for their boat. The decision was made to completely redesign the hull and deck moulds and bring the boat up to present day standards.

Late 2004, Mr Phil Morrison set about the task of redesigning the Osprey. Phil’s brief was to make the new Osprey a boat that would appeal to both existing Osprey sailors and a new generation of sailors. All modifications, changes and plans were discussed at great length and then finally approved by the Osprey Class Association.

Mr Ian Teasdale together with Kevin Driver were commissioned to build the plugs and moulds – their knowledge and experience being second to none. The first boat was produced early September 2005 which was followed by hours of testing. We are now happy that the boat not only looks fantastic but sails and handles superbly.

Production has now commenced at Hartley Laminates with a dedication to build a high quality product with longevity – offering you a real pride of ownership.
ID: 4276