The perfect family runabout in a spacious 19’ boat including a custom trailer. From the full width sun-pad to the to the fully finished ski locker, this boat is ready to hit the water.

Efficiënt and sensible The steel Catfish 46 is the model for this range of yachts. Its exterior is very similar to that of the Supercruiser 50 and Catcruiser 45 and available with a choice of 2 different layouts. Customizing the Catfish to your own specifications is also an option thanks to the new concept.

The Catfish 34 is the smallest Catfish in our Catfish range at its length of 10 meters. This steel yacht is 2 meters smaller compared to the Catfish 40 but retains the same level of space and comfort. The Catfish 34 layout is so efficient that 6 people can live and sleep on board without having to adjust one bed. When it comes to its exterior look it looks just like the bigger Catfish. Just like the Catfish 40 and Catfish 46, the Catfish 34 comes standard in two different layouts but customization according to your own requirements is also a possibility.

Viking Viki 285 Pilot
Featured Advert! Click for more details and your nearest dealer
The Company was founded in 1940's in Istanbul on the shores of the famous Golden Horn where on those days were the heart of Turkish Shipbuilding Industry since Ottoman Empire. The main areas of interest were building wooden Boats/Yachts and giving Slipway Services until 1984. In 1984, the company was relocated at Tuzla, about 30 km east of the city centre, the area which became the centre of Ship and Boat Building Industry of Turkey. In 1990 the company is reorganized by the second generation, who still is at the helm of the company, to built Luxury Custom Motor Yachts. The construction of two 27 m luxury Mediterranean style Turkish Gullet Motor Sailors, namely ALDEBARAN and ALTAIR, was followed by the construction of AL-FAILSALLAH, an 18 m. Laminate Wood Composite Luxury Motor Yacht for a Saudi Arabian customer. In addition to wood composite, Motor Yachts began to be built employing Strong Plank System which enabled Viking Marin to built GRP composite structured Custom Motor Yachts without the need of any moulds. The construction of a 12 m. version was followed by a 16 m. model the "HAGAR 52". The "Viking Marin 32", Flybridge and Sedan versions, designed by the Viking Marin team, is the first production boat with a moulded GRP Structure became very popular with single/twin engine options satisfying a wide range of customers with different expectations. The upgraded model "Viking Marin 34", Flybridge and Sedan versions, incorporates two semi tunnels for props producing higher cruising and top speeds with a bigger aft cockpit. 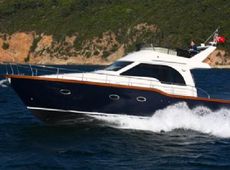 The Company was founded in 1940's in Istanbul on the shores of the famous Golden Horn where on those days were the heart of Turkish Shipbuilding Industry since Ottoman Empire. The main areas of interest were building wooden Boats/Yachts and giving Slipway Services until 1984. In 1984, the company was relocated at Tuzla, about 30 km east of the city centre, the area which became the centre of Ship and Boat Building Industry of Turkey. In 1990 the company is reorganized by the second generation, who still is at the helm of the company, to built Luxury Custom Motor Yachts. The construction of two 27 m luxury Mediterranean style Turkish Gullet Motor Sailors, namely ALDEBARAN and ALTAIR, was followed by the construction of AL-FAILSALLAH, an 18 m. Laminate Wood Composite Luxury Motor Yacht for a Saudi Arabian customer. 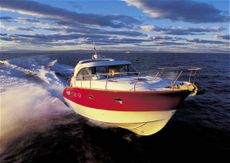 A spirited boat Over and above the Flyer�s recognised qualities - seaworthiness, safety, practicality - the Flyer12 shows our capacity to innovate to keep improving Performance and Comfort under way.Performance with a new hull and a revolutionary propulsion system giving increased speed, range and manoeuvrability.Comfort with the possibility of (re)configuring a part of the accommodation according to use when under way �.. and when added to this are elegant lines as well as luxurious and sophisticated accommodation, we can be sure that this boat is already a benchmark for the most demanding owners.

Rapida 990 is the ultimate tender for the water sports enthusiast who wants a unique combination of sleek style, luxury and speed. The boat has a true 'design feel'. Every detail has been considered. The seats are spacious and comfortable with cleanly finished, thick cushions. The tables are adjustable and the seats are ergonomic. There are passages along each side that take you from the large sun deck to the teak swim platform. The many stainless steel elements give the finishing touches. The Rapida 990 Cabin gives you a cozy cabin with a two-person bed and toilet. We can furnish the cabin further exactly how you want it, for example with a wash stand, shower, stove or fridge. This also allows you to enjoy a fun weekend away with the Rapida 990 Cabin! The Rapida 990 exudes luxurious speed, and the outstanding design of the underwater hull makes it exceptionally easy to handle. The good handling characteristics enable you to reach higher speeds comfortably. Even in more difficult conditions. Whatever engine you choose, the Rapida 990 is a safe and comfortable tender that exudes quality and enjoyment.

The Rapida 777 is our latest innovation with a sleek, but elegant design. A fantastic boat for a splendid cruise with your guests, or the more active water sport enthusiast can use it for fast action. The fantastic sun bed at the star immediately catches the eye. The backrest can fold forward to make it even bigger, with enough space for no less than 4 sun bathers. There are many propulsion options: the 3 cylinder 21 hp engine is standard, but with the introduction of the Rapida 777 you can choose as much as a 180 hp Yanmar engine that takes you to a speed of over 50 km / h within a few seconds ! With the specially designed underwater hull, the Rapida 777 remains stable and easy to steer under any conditions. With seating for at least 10 people, it's not hard to imagine how much you can enjoy this boat. The Rapida 777 is sure to exceed your expectations ...

For a modern family, this sleek tender is not only sporty and fast, it also invites you to enjoy time on the water together with family and friends. The layout of the interior looks more like a launch with the large, comfortable bow seat. This lets everyone sit facing each other around the helmsman. The Rapida 750 has space for at least 12 people. You don't have to be a master mariner to handle this tender well. Its handling characteristics are excellent. With the updated underwater hull, the boat performs even better at high speeds. How about a refreshing dive into the water? It takes no effort at all from the teak-inlaid swim platform, which runs across the whole width of the boat. And if anyone wants to stretch out to enjoy the sun, the large sun deck is the perfect solution.

The Rapida 666 is the compact pride of the iSloep design team. This elegant, modern tender, with its impressive style, has an excellent sun bed, adjustable bench and open stern. It has space for eight people to find many ways to relax. The Rapida has a light, but strong polyester shell and is propelled by a powerful Yanmar engine with maximum output or 42 hp (28 km per hour) as standard. With its outstanding underwater hull, the Rapida 666 remains very comfortable even at high speeds. The narrow bow, deep gunwales and flared bow provide excellent handling, which can even stand up to the open sea. The beauty of the versatile Rapida 666 goes further than its elegant lines, with its advanced performance and easy handling. The Rapida 666, the ultimate day boat for everyone!

ISLOEP 735
Featured Advert! Click for more details and your nearest dealer
A day out with your family and friends and a well-filled picnic basket in the iSloep 735 is an experience not to be missed. The 735 is stylish, modern and most of all comfortable with a strong but smooth engine and a large sun deck for a good view of the surroundings from the water. The many iSloep owners regard the 735 as the ideal launch for lakes and rivers. This iSloep is 735 cm long and is laid out to make it easy for two families to go out on the water for a whole day. Your guests will love the large sun deck. The iSloep 735 is stable, smooth and produces very little wake. You feel like consummate captain from the very first trip. The iSloep 735 is a complete concept that already includes most of the options as standard. Actually, all you have to do is pick the color. Will your iSloep be the popular black, white or gray edition? Or a combination of these colors? The choice is yours.

Do you want to get out on the water whenever you get the chance? If you want a day out with seven guests, or a nice outing for two, the Isloep 585 is the ideal boat for you. The good handling characteristics take you wherever you want to go, and with its length you can find the best moorage or jetties effortlessly. As soon as you step onto the iSloep 585, you're in holiday mode. That's because you're going out on a modern launch that is aside from being affordable and reliable, is also very comfortable with the thick anthracite gray cushions and the teak wooden floor and plenty of room to move, just around the helmet. The iSloep 585 is already very complete with the standard equipment, but there are many extras available. The only thing you have to worry about is choosing the color, because of the polyester hull and stainless steel and teak finish on the inside, this launch is almost maintenance-free. 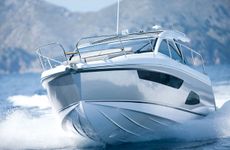 This award winning flybridge range of motor cruisers spanning 38 to 45ft has an enviable reputation for space, light, and innovative design. The F-Series flybridge cruisers have a striking contemporary exterior and a detailed luxury interior and offer sociable cruising for all on board. With a unique use of space, light and practical design the F-Series cruisers are ideal for families and entertaining friends. With generous accommodation, sociable saloon areas, flexible layouts and well designed storage areas, they cleverly combine everyday utility with style and performance.

The new C-Series starts with a stunning new model – the Sealine C330. A family boat, both inside and out and offers a wide range of unique features which clearly sets her apart in the market. Bold and distinctive, the new Sealine C330 breaks new boundaries. Powerful engines provide outstanding performance on the water. The design, from world-renowned yacht designer Bill Dixon, combined with the engineering and experience of the largest German recreational boatyard creates a perfect symbiosis. 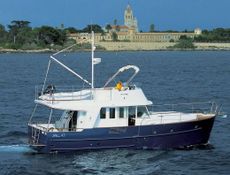 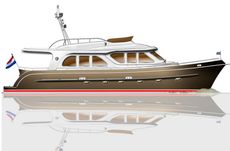 The new Global Voyager models are characterised by their elegancy, especially emphasised by the many rounded forms. Even then the dutch origins, defined by a long tradition are evident. The typical bow is a striking example.

The F46 has an open plan feel throughout. Every area of the boat seamlessly connects, from the cockpit through to the airy lower deck, making maximum use of space and light and ultimately creating a very social and relaxing environment.